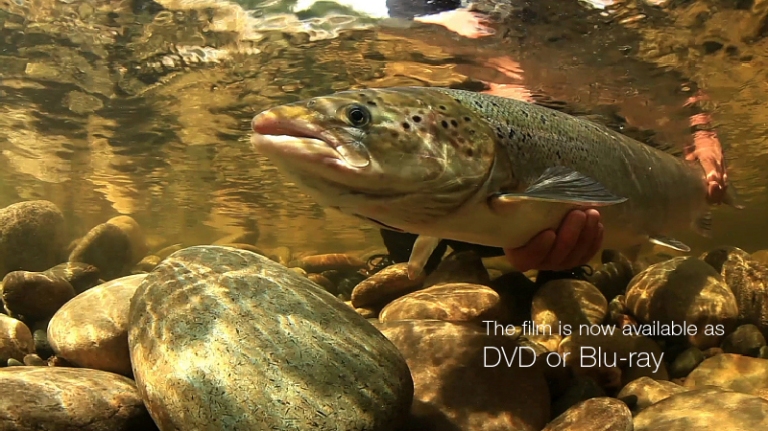 Good afternoon and I hope you are all enjoying this fabulous summer weather here in the UK (before the thunder storms strike tomorrow).

There is so much happening in the fishing world just now as the salmon fishing guns up in the wild places of the northern hemisphere.
Notably some gorgeous looking B-I-G silver salmon being caught on the River Gaula at Storen by Norwegian Flyfishers Club members/visitors.

A semi-underwater photograph of one of these by filmmaker and photographer Daniel Goz has popped up online today. The fish was a beautiful salmon caught by Jen-Luc Vestraeten from beat BS1 and as he released it Daniel was there to record the moment. See the fish here on this link – but not the underwater shot which was a Facebook job although the other pic is also brilliant.

I haven’t run it here so instead here is an old fav and another Goz shot. Regular readers will know it but let’s just say it’s a still from the Gaula movie and a happy memory…

The Varzuga is fishing its head off now but warming up fast and I shall be at their middle camp in two weeks which is just a little bit unnerving. I have been genning up on hitch flies, bombers and the like, helped in part by a nice article by Sandy Leventon in July’s TandS.

And a trip in to Farlows where Brian F has kindly undertaken the task of selecting me a little box of stuff to take out there – flies mostly. When I chose some 15lb Maxima ultra green he said – Go lighter than that. So 12lb or even my Hardy 10lb Mach fluorocarbon.
I tied Sunrays on plastic tubes and Salar gold and silver doubles last night but have to really watch out I don’t drop a hook on the floor as we have a new puppy scampering around in the daytime.
And the strange title to this post? Well I’m sure I’m not alone in believing for a time that the photo taken with camera turned back on oneself in a bid to capture a wild, solitary moment was somehow my invention. As a blogger I felt licensed to self indulge in this way but now that selfies have become ‘so’ mainstream I gave gone off them to some extent.

While I acknowledge however that they have captured the zeitgeist, the name however just sounds, well, selfish in the broadest sense but that’s to some extent the sometimes inward looking navel-gazing online world we sometimes inhabit. I was going to say no more selfies but I realise that’s ridiculous.
That’s it for now.

A World Class Fishing Destination In The U. S.

Finding my way from severe Crohn's disease to health

Life under the thinking tree

ruminations & travesties of the favorite yet naughty son of Nengkoy

In Pursuit of Meaning

Until I know this sure uncertainty, I'll entertain the offered fallacy.

News, politics, insights, inside information from the left

Into the Light Adventures

A daily selection of the best content published on WordPress, collected for you by humans who love to read.